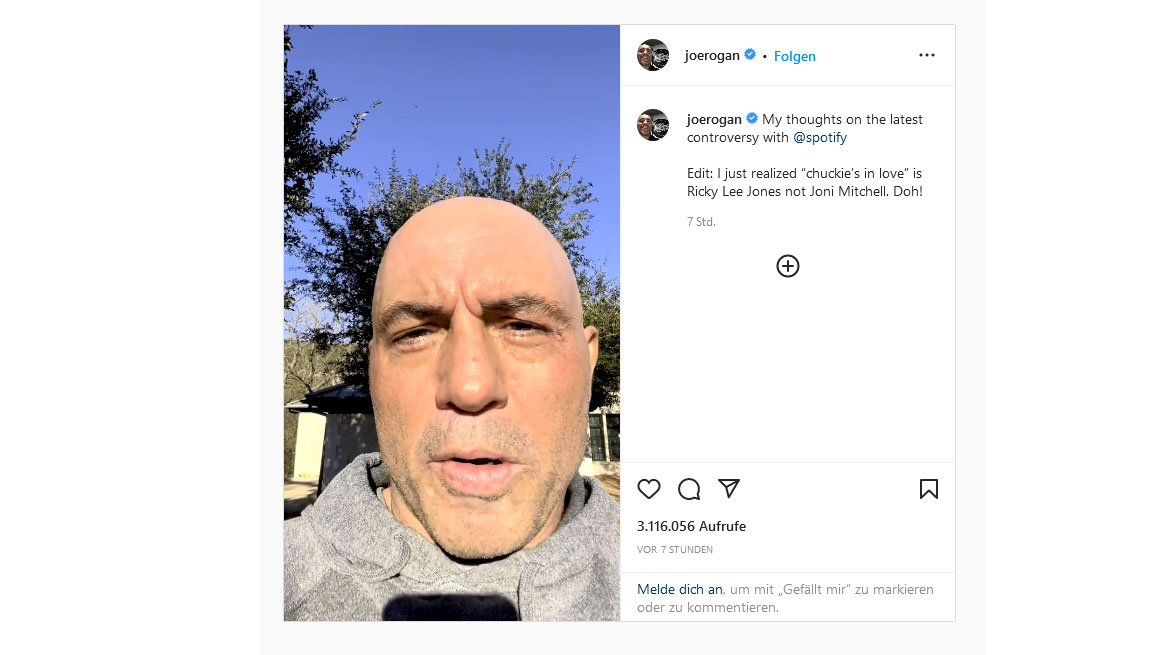 Joe Rogan has *somewhat* responded to the controversy around mussicians pulling their music from Spotify over guests on his podcast that spoke on the pandemic.

It’s clear he wants to be the man who sometimes has constroversial guests on about important topics and he hopes for these guests to be vindicated later on. But it can be very ciomplicated to be a hero with complex topics and there are a lot of false heroes out there who want to be on his show.

He mentions a few examples where controversial opinions were later vindicated such as the realistic probability of a lab accident as the origin of the pandemic, or the possibility of getting infected as a vaccinated person. What Rogan does not mention ist how many people, even with medical degrees, spread nonsense and falsehoods about the Pandemic and the vaccines and those people will never be vindicated.

His guest Robert Malone, who trigered the Spotify controversy, did some important work on mRNA technology 30 years ago which in scientific terms is an eternity. He feels that his work had been underrepresented and other scientists became rich and famous. Before 2021 the general public had never heard of him and suddenly he appeared on the biggest pro-Republican shows and promoted himself as a great aurhority about the supposed dangers of the covid vaccines. He claims the hero underdog status. In August 2021 he claimed in the Washington Times that the vaccine campaign wpuld increase the overall danger. He claimed to Steve Bannon that mRNA vaccines would make Covid infections worse. He was on Sean Hannitys show claiming that vaccines cause superspreaders. That the vaccinated would endanger the unvaccinated. He was on with Glenn Beck, Tucker Carlson etc.

He got a whole lot of media attention, despite getting banned on social media platforms. It’s not as if Malone was totally marginalized and had special knowledge. It’s not as if Joe Rogan found a guest that was an underground unicorn whistleblower.

Malone was already being showered with attention by media outlets close to the Republican party. And that is suspicious. The Republicans need people like him, with a credible past, especially early work on mRNA. Many Republican voters still trash and avoid the vaccines even when Donald Trump clearly and repeatedly advised people to get vaccinated.

In December 2021 Malone claimed that spike proteins from the mRNA vaccine harm children. It seems as if his intention was all along to get banned on Twitter. He claimed that vaccines don’t help against the omicron variant. He claimed that these standard tools of fighting a pandemic were mass psychosis and a conspiracy. Who in his right mind would even consider staging a fake pandemic in up to 200 countries? The amount of organization needed would be completely insane and downright impossible. How do you get countries such as Russia or Turkey or Iran to go along with a fake pandemic? Why not launch a real pandemic? That would be very easy in comparison and it’s almost impossible later on to find the true origin.

Joe Rogan said explicitly that he is disappointed by traditional conspiracy media because it’s too unscientific and he also repeatedly said he doesn’t trust the Republican party. He may look like a Republican but he is not. On very many topics he has a leftwing stance. He said he never voted rightwing in his life.

So he should be careful if a guy such as Malone gets a ton of airplay on the biggest pro-Republican media outlets.

Rogan says in his short video on the matter that he does not want or need to be especially controversial. Yes, he is very successful no matter what. He never had to support Trump the way other media outlets did. But he just had to invite Malone for some reason, trigger more cancellations and thereby making the controvery bigger and giving more attention to Malone. Lots of people don’t watch FOX news and don’t listen to Tucker Carlson or Sean Hannity. It’s unclear how many people in Rogans audience were exposed to Malone that hadn’t been previously exposed to Malone. Its unclear how many in Rogan’s audience were influenced by Rogan and Malone to not get vaccinated and instead put their hopes in certain medications which are also from big pharma and are created through genetic engineering. Rogan admits in his video that he does make mistakes. But he seems adamant that inviting Malone was still a good idea and that this guy may well be vindicated in the near future. It seems Rogan is under the impression that he is helping people, that he is preventing damage and he is getting people to pick the smaller risk.

Yet, he admits his show is virtually a one man band, that he doesn’t prepare much for these conversations. He picked the Spotify deal because he does not want to lead a complex media organization with multiple employees and boardrooms and editorial choices and all that hassle.

It seems like a shortcut to fame: Be overly controversial, get cancelled by big social media corporations and then try to get on Rogans show. Now Rogan is generally aware of the danger that the wrong kind of people want to get on his show. And also that some potential guests are a difficult matter.

For a super long time he never had Alex Jones on as a guest until Jones had a massive psycho tantrum on air. Then Rogan booked him as a guest a few times. He gave Jones the opportunity to say something special but nothing special was said. Rogan was open about his disappointment with traditional conspiracy media overall. What may have led to Rogan inviting Jones was the deletion of Jones’ social media accounts.

Cancel culture is a problem. But that goes many ways. A lot of people are cancelling anyone and anything that promotes the vaccines and other standard measures to handle the pandemic.

Rogan promises to do more research in the future and to follow up on controversial guests such as Malone with other guests wih a different view. We’ll see how that goes. He says he does not seek a fight with Spotify.

He’s still juggling multiple carreers. Hes a podcaster, a comedian, a UFC commentator. He’s also a parent. And rumor has it he has plans for some projects in Texas. He’s also a professional weed smoker. Its clear he needs to hire some professionals to do research for him on topics, potential guests and questions to ask on the show.

I mean, his monthly weed expenses alone could pay for at least two professionals.

Bio Defence is secret. Fauci can’t tell you what he knows

Sweden failed. Despite a real lockdown mislabeled as “voluntary”